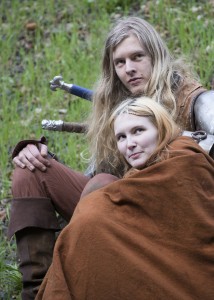 A couple weeks ago my photography club attended an event where people dressed up in medieval and fantasy costumes, specifically to be photographed. The event was on the outskirts of Prague in a nature preserve called Divoka Sarka. The area is beautiful, with streams, forests, and ravines. It was one of the first warm days of spring so people were out on bikes, jogging, or strolling with their families. The area lent itself to the medieval theme.

Later I did a little research and found out that the name Sarka was a female warrior who, according to legend, killed herself by jumping from one of the cliffs after betraying her lover during the Maiden’s War, something like 800 years ago. I didn’t know any of this when I was photographing the event but it made sense, I could feel the history of this place.  And here were all these people dressed up in medieval outfits - my Slavic DNA was right at home with all of it.

One lady in particular was really intriguing. She had two beautiful dogs that were both part wolf. I think she may have been a wolf in another life. She clearly had a deep connection to these animals. She had green contacts and had affixed a dog like tale to herself.

The whole thing was really an amazing experience - and a lot of beautiful, cool people.

I completed my 2 weeks of Czech language classes.  The format was 3 hours a day Monday through Friday.  It was pretty intense, definitely a challenging language to learn.  Our teacher was an energetic Czech lady named Petra, with dyed magenta hair. There were 6 of us in the class; another American whose son moved to Europe years ago to write novel and ended up marrying a Czech lady and never left, a lady from Bulgaria, a man from Turkey with Kurdish background, a guy from Denmark, and a man from Switzerland named Andreas. Andreas is the quintessential European, impeccably dressed with designer glasses and stylish silver hair. He’s in his 60’s and carries a big euro man-purse and travels with a 100-year-old beer mug with a silver lid. He’s a jolly and social guy anxious to share about the latest classical music performance he just attended. In the beginning, Andreas would periodically divert the discussion to philosophical conversations on things that had nothing to do with learning Czech, whether it was the role of a professor in other universities, some technical difference about how things are done in another language, or some other trivial thing. Usually I had no idea what he was talking about.

Ten minutes into one of these diversions I was literally dizzy, and all I could think is “what the hell just happened?” An hour into the first day, Andreas insisted that we should take breaks every 45 minutes instead of halfway through the 3 hour class. He insisted, that’s how it’s done in universities - that’s how we should do it. The Swiss like things done by the book. That was a whole 10 minute conversation by itself. Petra was great and rolled with it. Eventually he just let it go. At the end of the last class of the first week, Andreas threw each of us a small Toblerone chocolate bar stating, “The Swiss make the best chocolate!” Also, he asked each of us to write our address on a stamped envelope, so we'll all be getting a note from our new Swiss friend!

I was the only one in the class who didn’t speak a second language, so I struggled the most, but I did start picking it up. After my first day I immediately recognized some words, and the language all of a sudden seemed a lot less mysterious. On the last day of class, Elena, the lady from Bulgaria brought some amazing Bulgarian cheese pastries she had made for us. Also, after the last class, Andreas insisted that we needed to all go and have a beer and food together. He made a reservation at a close by restaurant. We all met, celebrated, and had a great time. Andreas of course drinking out of his 100-year-old-beer mug!

I love my new CrossFit gym, CrossFit Committed. It's a really well run gym with a great facility. The coaches - both Czech and American are top notch, and the member community is wonderful. Another really great thing is the little café which is run by a husband and wife team, Erik and Petra. They make wonderful home-made food for a reasonable price and it always hits the spot after a workout.

There is a warm up routine at the gym called Roxanne where they play the song Roxanne and you drop and do burpees every time Sting sings Roxanne - you get warmed up pretty quick. The gym had a big competition a couple weeks ago and I photographed it. I didn’t realize what a big deal it was until it was under way. There were four teams: The Ninjas, The Space Lords, The Unicorns, and The Jedi's.  They had little figurine mascots for each team - I came up with an idea to do a photo in a CrossFit setting for each of them.

Little by little I’m figuring out all the technical aspects of life. I ran into the lady who lives in the apartment above me. Her name is Marketa, she has a 1-year-old and a toddler. She speaks good English and has been really helpful. She made sure I knew the code to enter the building, which is her baby’s birthday. It falls on the 3rd of the month, which is easy since my birthday is also on the 3rd.  I’ve had to adjust to how dates are written - the format they use is the day/month/year. I’ve mixed some things up - but I’m getting used to it. I received my first piece of mail, a hat I had ordered from REI but arrived after I left. I had it shipped to me, and it was opened by the Czech post office.  This apparently is the norm with shipments coming from outside of the Euro Zone. I had to have my Czech teacher talk to the utility company to help me figure out how to pay my electric bill.

One thing that I’ve observed is how much less trash is generated by this culture vs.  American culture. In my apartment building there are two trash cans which serve 20 apartments.  Combined they are only slightly larger than the trash can I had in Albuquerque. They have these cool recycling stations on my block with a deposit receptacle sticking above the street for plastic, glass, and paper. I recently saw a statement about trash that struck me: “There is no ‘away’, when we throw something ‘away’ it actually does go somewhere.” I think about the amount of trash generated by the American lifestyle. I’m thankful to be living in a way that involves throwing less ‘away.’ 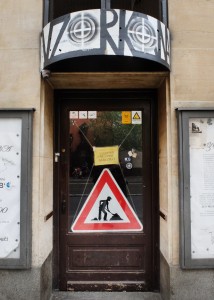 A couple weeks ago I was researching things to do and came across an interesting sounding bar so I decided to check it out. It’s in the basement of a hundreds years old building near the heart of Prague. The description I read online had some warning about the unique people who frequent this place - so of course I was immediately interested in checking it out. The entrance is a non-descript door on a busy street. At the entrance there was a heavily pierced, unhappy looking bald guy buzzing people through a metal door and collecting an entrance fee. Immediately behind him were stairs descending into a dimly lit stone-walled maze of halls and rooms. You never knew what was going to greet you around each corner.  Around one, a group of euro-millennials gathered around a guy with a guitar. Another, a group hunched over under a light cloud of wafting cannabis, and around another, a freakish Andy Kaufman-like character singing Elvis songs with his portable karaoke machine.

Around every corner was a surprise. The online description also mentioned a big dog. I didn’t really think anything about it, but I came around a corner and there it was - literally the biggest dog I’ve ever seen in my life. A giant Irish Wolf hound. The dog was laying in the hall when I saw him but eventually would get up and go sit somewhere else, like a mythical creature of the layer roaming around this medieval cellar. There was a main room packed with people, with a stage and a piano, and a band was playing. A great band playing mostly covers. The band broke into Wonderwall and the place went crazy. Two things they love here for sure: 80’s videos and Oasis. I see and hear them playing everywhere.

Prague is apparently a popular destination for bachelor parties, and they have an interesting tradition of dressing up in odd costumes. Bands of ridiculously dressed young men from other countries roam the streets of downtown Prague. I’ve encountered a few of these groups. Last week I encountered a group of 5 in a metro station that were dressed up like women. I didn’t have my camera so I reached for my phone to take a photo. When they saw me they all immediately started running towards me, the ring-leader insisting in a deep accent “You need 5 bitches!” Before I knew it I was the centerpiece of their group selfie.  Unfortunately, the whole thing happened so fast I didn’t have time to get a photo of this very special moment.

I had to go to Berlin last week to process my visa application at the Czech embassy.  I just spent one night there. It’s about a 4 and a half hour bus ride from Prague. The buses are really nice, with wifi and reasonable prices - about $50 round trip. On the way there our bus was pulled over by the German police to check everyone's passport - I'm assuming because of the refugee situation. I brought my camera gear to do some photography even though I wasn’t going to have much time. People think it’s great that I’m a photographer because I get to just go around and take pictures - and it is. However, there are plenty of times when I don’t want to - when I’m not feeling inspired. But of course, inspiration comes and goes like the wind.

I arrived in Berlin in the late afternoon and checked into my pension. I forced myself to get out and do some photography with the remaining daylight. I also decided that I would get out first thing in the morning and shoot for 2 hours. I got up and hit the streets of Berlin with my camera gear. After an hour I was feeling no inspiration, I just wasn’t seeing anything that called to me to photograph. I thought about just wrapping it up and getting breakfast. Breakfast was included in the cost of my pension, and the Germans usually do a great breakfast. We’re talking gourmet cheeses, fresh bread, fruit, great coffee - all of it just waiting for me. But I decided, no, I’m going to keep going. I decided to go back to an area I had checked out the previous day, not really expecting to find anything new. I walked down a stairway which lead to a trail, there was a pond with some ducks and the sun was rising...the result: 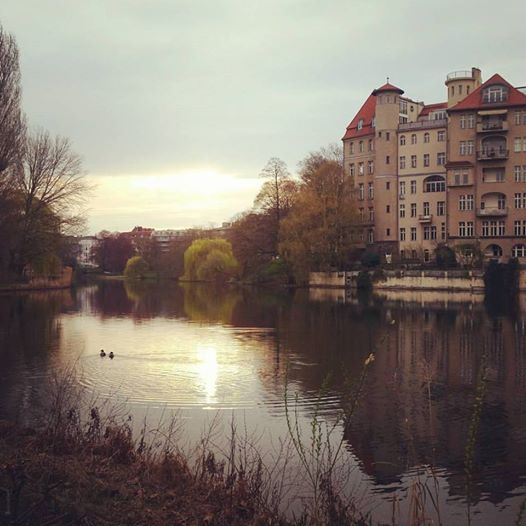